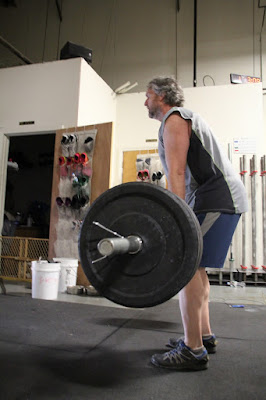 In the photo above, I was back at CrossFit after a 2+ week break, doing deadlifts in workout called Bradshaw (more below).

I seem to finally be over a cold that lingered for about two weeks. Most years, I deliberately plan a 2-3 week downtime, where I basically give myself permission to do nothing at all, unless I'm really motivated. Usually, this break comes in the winter, so I will do some skiing, but not much else for a few weeks. I think the rest is good for me, and it helps me (mentally and physically)from getting burned out on training. But, about 14 months ago, I discovered CrossFit. And somehow, last winter, I forgot to take a break.
I looked at my training logs over the past couple weeks, since I wasn't training. I was curious how long it had been since I'd gone more than a week with no workouts at all. The answer was 13 months - much longer than it should have been. Between a lot of stress at work and the training I was doing, I think everything just caught up with me. And, after about two weeks with no workouts at all, and then a week to ease back into things, I am feeling much better.
During the past three weeks, I got past some major hurdles at work. I was faced with a few really difficult technical issues around a new product and how to generate reports in a totally new software architecture, and I managed to solve all of the problems (no thanks to one of the hugest software companies in the world, who will go unnamed here). I caught up on sleep. Over a four day Thanksgiving break, I slept more than 10 hours for three straight nights.
And last Wednesday, after no workouts for two weeks, I hopped on the rowing machine after work. I rowed my second fastest 5K ever on the rower. Then, I took a rest day and cooked Thanksgiving dinner for my family and my wife's family. The day after Thanksgiving, I did a workout on my own - some lifting and Abmat sit-ups. The next day, I went to CrossFit, and did a scaled down version of a tough workout named Bradshaw. And then, I rested for two days, despite the fact that I had the option to ski on those days. I simply felt like I needed the rest and there will be many days to ski starting very soon.
Last night, I went to CrossFit after work, ready to do a hard workout for the first time in a while, and I most certainly got a hard one:
30 minutes, as many reps as possible:
5 deadlifts (I did 205#)
13 push-ups (I switched to knee push-ups within the first 10 minutes)
9 box jumps (18")
I think I completed the fewest rounds of anyone in the class, doing 12 total rounds. I was averaging 2 minutes per round for the first 8 rounds, and then suddenly, it was taking closer to 3 minutes per round. Despite switching to knee push-ups, my triceps are still shaky this morning from 156 push-ups. My legs are also feeling the 108 box jumps.
Tonight's workout starts with heavy back squats. After that, I'm guessing we'll do a much shorter main workout, given what we did last night.
This coming weekend I will be doing pre-season ski instructor training. Hopefully, some of it will be on snow, but the weather is making that look less and less likely. It's been ridiculously warm, and after being open for 4 days, Sugarbush had to close on Monday. Even if I spend the weekend just talking about skiing, it will be nice to spend time with my ski instructor friends and get ready for the upcoming season. I'm probably going to have a different role at the mountain this season. Rather than spending the season with a fixed group of students, I'm going to be a fill-in coach, a trainer for newer coaches, and then spend a lot of time in training with our most experienced coaches. By the end of the season, I would like to take my PSIA level 3 skiing exam. In order to get ready for that exam, I need to have a more challenging season than my normal job, and I need to spend time improving my skiing, with feedback from our best instructors. My boss suggested that a different role this season should challenge me more than my normal job, allow me to take the training I need, and also help out with some of our newer coaches. I'm looking forward to a very different kind of season.
Posted by Damon at 8:29 AM No comments:

The snowmaking guns are on at Sugarbush!
I'm excited to see some good friends from college this weekend, and looking forward to cooking with my good friend Bob. He and I are doing a multi-course dinner for our wives (plus my two children and one other girl who is visiting for the weekend) and it should be a lot of fun. I've got 4 different courses from a pair of ducks (pate, duck breast prosciutto, confit, and seared duck breast) plus sweetbreads and beef carpaccio on my list of courses, along with some local cheeses. Bob will add a soup, a salad, and a dessert. They will be tiny courses but a lot of fun. I've put an incredible amount of time into a few courses that will be over in a bite or two.
After this meal, cooking Thanksgiving dinner for 14 people next week will be a breeze.
Thankfully, I seem to be getting over my cold just in time for this dinner. Right now, it's been 8 days since my last workout and I'm not quite ready to return to the gym. Hopefully, I'll be at CrossFit on Monday, ready to go. Before this cold, I had gone no more than 5 days with no workouts earlier in the year. I'm guessing that CrossFit will be tough for a week or two, given that the explosive strength/lactate threshold fitness is the first to disappear when you take a break.
Did I mention that the snow guns are on? If all goes well, I'll be wearing ski boots one week from today.
Posted by Damon at 8:44 AM No comments:

Random thoughts from a runaway life

I just deleted two posts I wrote about the whole Penn State scandal. The more I've read about this on the internet, the more I've been disgusted with smug writers who seem to know (without a doubt) who did what, who was at fault, what should be done, etc. I've decided that I don't want my blog to even be part of that conversation.
I seem to have come down with a head cold. Work has been intense and stressful, with a 12+ hour day yesterday. In the last couple weeks, I've also gotten somewhat lazy with my diet, eating grains, particularly wheat, after assiduously avoiding them for months. Is getting sick related to that?
Two weeks ago, I got in five good workouts. Last week, I only got in two workouts. Work played a factor there. Stress. So, maybe being sick is a combination of diet, stress, and lack of sleep. I'm trying to fix all of these right now, although the stress may never go away unless my job goes away. And if that happens, one type of stress will simply replace another.
Right now, even though I haven't done a workout since last Wednesday, I'll probably take a few more days off this week, given how I feel right now.
My son managed to wreck our second car two weeks ago, and he came very close to totaling the car. He has stepped up to pay for a rental car and the deductible, and it's been an expensive lesson for him and an inconvenience for everyone else.
The car accident prevented me from getting to the Stone Cat marathon as planned. My wife and I were planning two nights away from home for that race, and without another car at home for the kids, that wan't good parenting. And, the marathon had prevented me from attending a party for a good friend that I don't see often enough.
My wife and I did manage to see Furthur a couple weeks ago, mostly because that one was close enough to home that we could leave home just for the evening. I have to wonder if that's the last time I'll see Phil and Bobby in concert. There were some high points in the show, but the audience was nowhere close to a sellout. If they aren't selling out medium sized venues, maybe they'll decide it's not worth living on the road all the time.
I even took a few days of vacation around that show and the planned marathon. But then, I did some work on every one of my vacation days - not really the time off I needed.
This weekend, some good college friends are coming to visit and I'm very much looking forward to the visit and cooking a nice dinner for all of us.
Today is 11/15. Sugarbush had hoped to open for skiing on the 19th, but it was 60F when I got up this morning. It is supposed to get colder towards the weekend and with a little luck, we might be skiing the following weekend.
And maybe in a few days, I'll get back to CrossFit.
If I don't spontaneously combust before then...
Posted by Damon at 10:16 AM 1 comment: